The store will not work correctly in the case when cookies are disabled.
SPECIAL OFFERS Hoses cut to length sales@thehosemaster.co.uk
CALL US (+44) 01282 604002

How Do You Stop an Air Hose From Whipping? A Guide to Whip Hoses 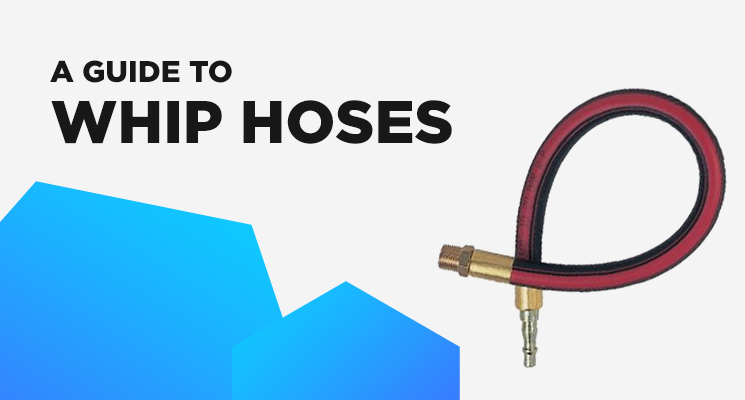 Working with compressed air can be dangerous. Should an air hose disconnect from its couplings and whip around it can lead to serious injury, or worse… But, how do you prevent this from happening? Keep reading and The Hosemaster team will tell you everything you need to know about whip hoses.

What is a whip hose?

Whip hoses (also known as air leader hoses, anti-whip hoses or hose whip restraints) are a length of hose that’s designed to fit between an air tool and the coupling to its air supply.

The primary cause of hose whipping tends to be vibrations which can cause quick disconnect couplings to come loose from the tool, resulting in the now disconnected hose to whip around erratically - potentially causing injury and damage to both the operator and nearby assets and property.

A whip hose sits between the air tool and its coupling, distancing the tool from its air supply and reducing the vibrations which can lead to whipping incidents.

Why should you use a whip hose?

Aside from it being an obvious safety precaution, the use of whip hoses is recommended by the UK’s Health and Safety Executive.

As part of their HSG39 guide to compressed air safety, the Health and Safety Executive (HSE) recommend that, “if a quick-acting coupling socket is fitted at the hose end adjacent to the tool, the plug should not be screwed directly into the inlet port but should be fitted onto a short isolation hose.”

In other words, if you're going to be working with a compressed air tool, you’ll want to make sure you’ve got a whip hose integrated into your setup.

But, it’s not just the HSE which recommends the use of whip hoses in compressed air use cases; the International Standards Organisation (ISO) recommends it too.

Under their standard ISO 6150:2018, it’s recommended that whip hoses are at least 300mm in length, which provides a sufficient length of hose to isolate both the plug and socket from vibrations.

How do whip hoses work?

Whip hoses work by reducing vibrations, but how exactly do they do that?

It’s all a question of length. By increasing the distance between the air tool and its air supply, a whip hose reduces the chances of vibrations interfering with the couplings.

In this way, a whip hose creates sufficient distance to dissipate any vibrations.

What types of whip hoses are there?

When selecting a whip hose for your own compressed air applications, it’s absolutely vital that you select a hose with the correct-sized couplings. 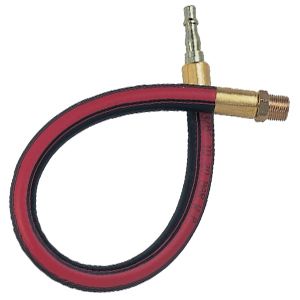 Here at The Hosemaster, our whip hoses are available in a range of British Standard Pipe Taper (BSPT) sizes, such as ¼”, ½”, and ⅜” sizes, with connections such as:

It’s important to remember, however, that whip hoses are only one part of the compressed air safety equation.

Where possible, use retractable hose reels

If hoses are lying around on the floor, they’re more likely to be accidentally trod on and suffer damage. Where possible, use retractable hose reels to keep hoses safely stored away and easily accessible for workers.

It's good to get into the habit of checking hoses and couplings for any damage prior to use. Dirt on or in couplings can lead to malfunction with serious injuries as a result.

Likewise, damaged hoses can swell and burst. Should you discover even slight damage on a hose, it’s best to replace it.

Many workshops, garages and other places of work are dark and/or dimly lit. So, to prevent trips and falls, consider using hoses in bright colours. This means they can be more easily spotted and stepped over (if left on the ground).

As we mentioned earlier, bodies such as the Health and Safety Executive (HSE), have created detailed guides which set out the safest ways of working with compressed air.

It certainly pays to be aware of this guidance and ensure it is followed in your own workplace.

The Hosemaster: your number one stop for hoses, couplings and workshop supplies

We stock much more than just whip hoses. Whether you’re looking for hoses and ducting, clamps and clips, fittings and couplers, valves and gauges or a whole host of other workshop supplies, you’ll find them here at The Hosemaster.

Employee at The Hosemaster

What is a Food Grade Hose?

What you need to know about Compressed Air Blowguns

How Do You Stop an Air Hose From Whipping? A Guide to Whip Hoses